The Mitsubishi Lancer is one of the most legendary cars ever.  The amount of influence the Mitsubishi Lancer has had on popular culture is absolutely undeniable.  Since the car has been featured in the Fast and Furious franchise, the rest is history.

The market of tuners and imports is a hard market to convince and capture. Between the Mitsubishi Lancer, Subaru STi, Eclipse, Toyota Supra and more, there is a serious fan base.

With all that said, every time Mitsubishi releases a new Lancer model, nearly everyone goes crazy.  That hype is completely justified, given how the Lancer has performed in it’s life time.

Now here is the sad part.  The Lancer for the United States market has been put to rest, which brings a lot of fan boys to tears.  While we in the U.S.A won’t see another Mitsubishi Lancer for some time, the Lancer lives on in Asian markets as the “Grand Lancer”.

I can’t tell you how much I’d give to see another 2017 Mitsubishi Lancer Evo in the states, but those prayers will fall on deaf ears.

This is deeply saddening, because the Grand Lancer in Asian markets is nothing like the Lancer Evo we’ve seen in the past.

So what would a 2017 Mitsubishi Lancer Evo or SEL look like?  Now, we turn to the internet. 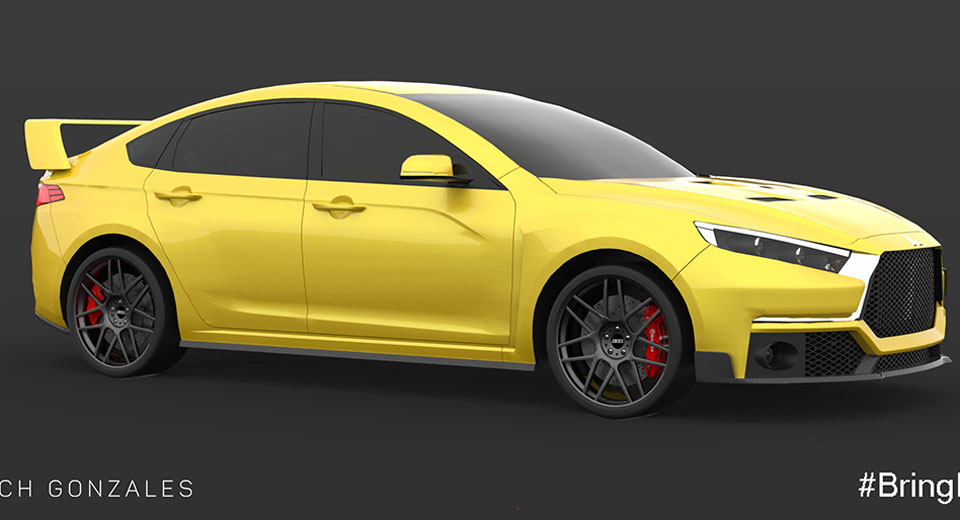 While the last Lancer Evo we got was a pretty ugly sight, the MR and performance versions (kind of) made up for it in the front, but the rear was just…bad.

I know there’s plenty of people that disagree, but I will take the Evo nine over the Evo 10 any day.

Anyways, using the Grand Lancer as a type of back drop, we can imagine a much more hard core version to fit the bill.

From the front, a heavy helping of black intakes, slashes and aerodynamic upgrades would present.

A lot of artists showcase a lot of features from the Evo X, but the less the 2017 Mitsubishi Lancer looks like the last generation, the better.

While the example pictured above looks a lot like the current Grand Lancer, the chrome surrounding the new grille is just tacky.  If the 2017 Mitsubishi Lancer Evo were to come back, I’d hope they would do a better job.

The rear end of the Lancer Evo 10 was one of the ugliest looking new cars you could buy.  The added huge wing did no help, and neither did the dual exhaust tips.

Facing the back of the car, you could see how tall the whole thing was.  There was no personality added to the back of the old Lancer Evo 10.  I can only hope the 2017 Mitsubishi Lancer would at least do a slightly better job.  Maybe Mitsubishi ran out of money to make a cool rear end…

The interior for the Lancer has not really come a very long way if you compare the Grand Lancer and Lancer Evo 10.

There is a considerable six year gap between the two, but they are very similar.  Given that rather unfortunate trend, it is likely that the 2017 Mitsubishi Lancer’s interior would be just as…vanilla.

That is not all that bad though, since the Lancer Evo is a driver’s car, it doesn’t need a lot of luxury.

However, I’m not crazy about how Mitsubishi did not evolve at all.  Even Volkswagen upgraded their interiors a bit in the last few years…And they’re going through a huge scandal! No excuse for Mitsubishi.

Now, the performance for a Mitsubishi Lancer Evo is the single most important aspect of a car with its stature.

If the 2018 Mitsubishi Lancer isn’t able to run around with super cars, there’s no point in producing it.

Even if they didn’t come race ready out of the box, tuners would strap whatever product that promised more horsepower to their Mitsubishi Lancer.  The result was some ridiculous performance figures that should not be allowed.

With all of that said, the imaginary 2017 Mitsubishi Lancer should be able to come with around 360 HP from an all wheel drive platform.

The version available in Asian markets is a very simple sedan.  It is front wheel drive with a 1.8 L four cylinder engine and a CVT transmission.  It is so sad given where the Lancer was a few years ago, that I don’t want to talk about the Grand Lancer anymore.

For our sake, the 2017 Mitsubishi Lancer Evo would have a proper six speed manual transmission, drive all four wheels, and have enough power to break your neck.

Then two months down the line, someone would throw two turbos in and race it in the streets of Tokyo.  Sound familiar?

I don’t think we’ve seen the last of the Mitsubishi Lancer.  It will be back.  I think that since the 2018 Toyota Supra is just around the corner, that will cue in the return of great tuners.

Between the Supra, Lancer, WRX, and many others, 2018 and on will bring lots of surprises.  Keep your eyes peeled, everyone.  The 2017 Mitsubishi Lancer will not be the last.