The Nissan Armada is a big, V8, body on frame SUV that was slowly dying in relevance until recent years.  All thanks to the big SUV boom in the United States, more and more Nissan Armada’s move off the lots.

Unfortunately, here in the United States, we’ve gotten a very soft version of this SUV.  The Nissan Armada is known as the Patrol in other parts of the world, and is a completely different animal.

The Patrol is pretty much a competitor to Toyota’s Land Cruiser in other parts of the world.  While the Nissan Armada here in the United States is just a big, V8, body-on-frame SUV.

This is spreading a huge theme we see in Nissan in recent years.  Nissan makes some of the most plain vehicles on sale, but also the most interesting.  And that is kind of funny. 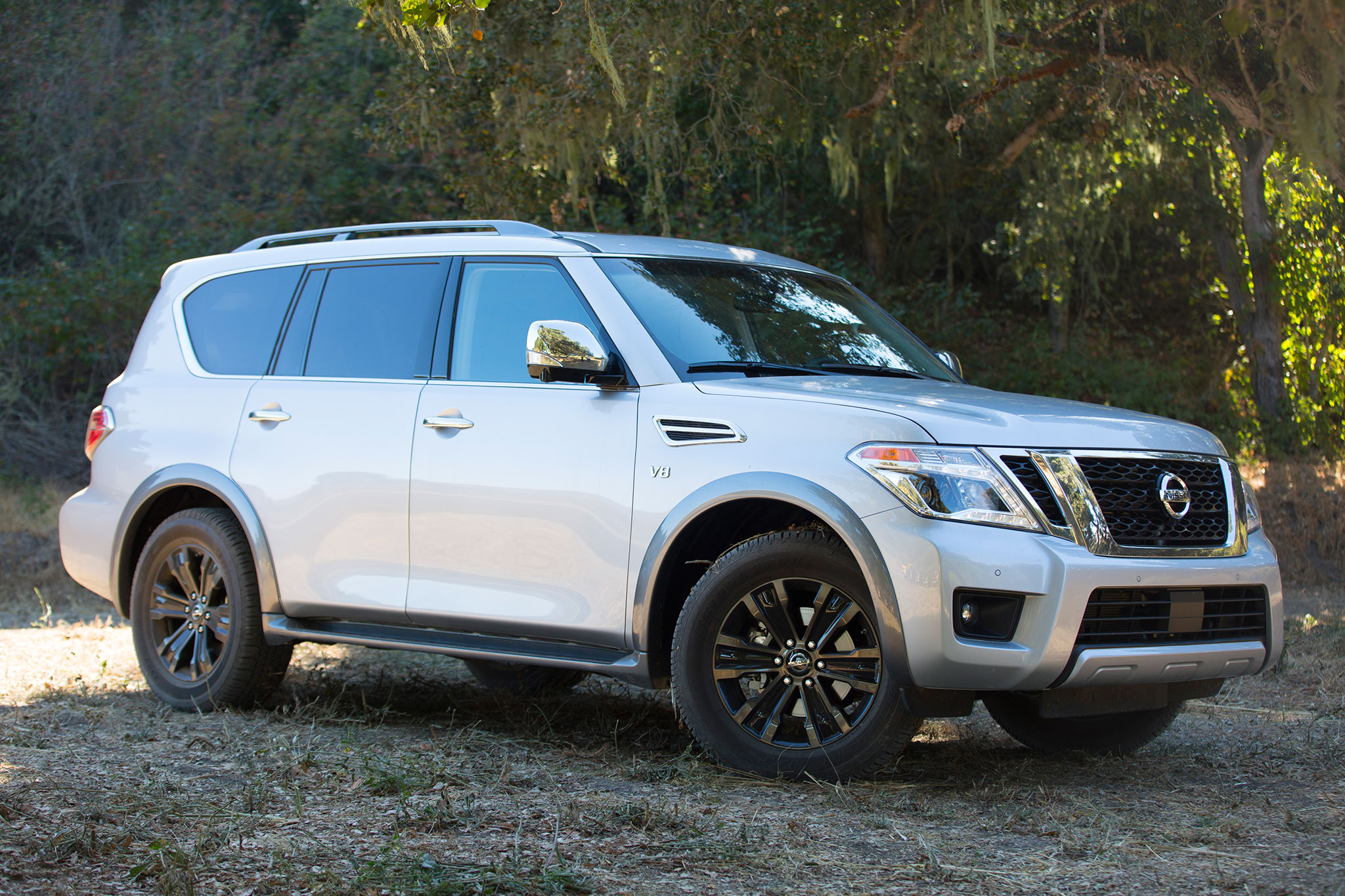 The 2017 Nissan Armada is largely the same as what we’ve seen for a couple years.

The big Nissan grille is enlarged a bit, headlights are recessed, and the front bumper remains strong up front.  The new Armada has a more updated design now, but keeps what the Armada has looked like for years.

Front to back, the 2017 Nissan Armada is just vast.  There are a lot of cues in which you can see the Nissan’s cousin, the Infiniti QX80.  Both are incredibly big.

The rear end features a big lip sticking out as the rear bumper.  I’m not crazy about how it looks, but it adds to the new off-road nature of the Armada.

Like I said, the Armada is known as the Patrol in other parts of the world.  The new Armada will adopt a lot of what we see in the Patrol for the US market, which is all fine and good since that vehicle is doing great across waters.

The 2017 Nissan Armada gets some new tail lamps as well, with a more skeletal look.

Overall the massive SUV is much of the same thing we’ve seen for a while.  A few different changes mean that the 2017 Nissan Armada will be more capable off road.  Interestingly, the new Patrol architecture under the new Armada (I know that sounds confusing) makes the SUV a bit smaller than previous generations.

The new design will make sure all off-road junkies will be happy.  I think that the new 2017 Nissan Armada is a great step as it becomes more unique here in the United States.

And again, Nissan makes the more boring, awful interiors on the market.

We need to always remember that when we review these cars, because the 2017 Nissan Armada’s interior is no exception.

The use of wood and leather is nice and plentiful, but in all the wrong ways.  The layout and spacing is just old looking.  Like some sort of early 2000’s Buick.

The infotainment is completely outdated with a bunch of buttons and knobs all over the dashboard.  There is also a knob for the controls on the infotainment under the shifter in some sort of iDrive system.

This is again an issue I have with Nissan.  The exterior of the 2017 Nissan Armada looks very nice and updated.  But the interior does not reflect that at all.  It almost looks like it’s from a completely different generation.

While the interior isn’t much to be really drooling over, the whole concept of the 2017 Nissan Armada is for being a more off-road vehicle.  However that’s not really an excuse for the interior to be so dull and old.

I swear that Nissan has had the same guy design their interiors since 2002 and he never tried to update them.

I want Nissan to update the Armada’s interior to really decide what side of the spectrum it is on.  Luxury, or off road.  Combining the 2017 Nissan Armada with the Patrol is a good step, though.

The 2017 Nissan Armada comes with one engine option, and that is the good old 5.6 L V8 that produces 390 horsepower and 401 pound feet of torque.  This big hunk of metal is connected to a seven speed transmission.

That power is ample for the new body-on-frame, V8-powered monster to be as legendary as it is at Dakar.

The new 2017 Nissan Armada is going to be a great aftermarket spectacle.  People in the Unites States should be grabbing them up like they do across the world and taking giant lift kits and tires on them.  That is what this thing is engineered for.  I just hope the market sees it too.

The 2017 Nissan Armada is largely the same big SUV we’ve seen for some time, but it now has the Patrol underneath it, which happens to be a proven platform.

The more people realize what this SUV is capable of, the more they will buy them up; As they should.

The release date for the 2017 Nissan Armada was in the Fall of 2016, so if you’re in the market for the next generation, find your nearest Nissan dealer!