The 2017 Toyota 4Runner is part of Toyota’s special off-road family.  It almost seems like the off-road SUV’s that Toyota makes are in a bit of a category of their own.

Between the 4runner and the Land Cruiser, Toyota does have an interesting hold and space in the whole off-roader or rugged SUV market. The SUV’s Toyota makes for this segment are very different from their sedan or caravan division.

The 2017 Toyota 4Runner is a big, boxy, dimply and heavy SUV that sells for around $35,000.  It isn’t exactly a staple or flagship vehicle or even big seller.  It holds an odd spot in the Toyota line up, as the Land Cruiser does.

There aren’t many vehicles left to compete with the 2017 Toyota 4Runner, which you may say is a good thing, but it kind of isn’t.  The reason these kinds of pickup trucks with no bed died off is because everyone is switching to SUV’s.  The 4Runner is barely an SUV.

The exterior of the 2017 Toyota 4Runner isn’t the problem with its low sales numbers.  It is a burly and boxy (I’ve used plenty of “B” words to describe this vehicle) object with a strong nose line.

Front to back the 2017 Toyota 4Runner is bulky but cohesive.  The vehicle was redesigned back in 2014, which means the current model is aging a bit.  What direction they take this behemoth in I have no idea, especially since they pulled the old “Special trim level” trick out of the back with the 2015 TRD model (which is the 4Runner’s best form).

The Styling of the 2017 Toyota 4Runner is pretty up to date still, and again, the styling isn’t the 4Runner’s main issue.  From the way it is styled, it is clear what the vehicle is geared for.  Pure off-road capability.  In that way, you could pit this versus the Jeep Wrangler Unlimited, and we’d have an interesting match up.

The interior of the 2017 Toyota 4Runner can be a very nice place if you spec it out correctly.  You can get some stylish wood inserts and cocoa leather seating which makes the vehicle look very well equipped.

The layout of the dashboard is very straight forward for every trim level.  while you do lose some luxuries as you do with base level trims, the entire layout remains clean and full, rather than a ton of empty buttons like you get on other brands base vehicles.

What Needs To Be Updated:

However, a make over on the inside may be due for the vehicle.  The infotainment/navigation screen is pretty small, and there’s some other tech that needs a refreshing.  The air conditioning controls are as good as they’ll get, but the center stack could use a change, if that is something Toyota is interested in actually spending money on.

You can seat 5 adults in the standard 2017 Toyota 4Runner, but you can get the seven seat option with a third row to seat everyone in your family in some nice leather luxury.

I was genuinely impressed with one figure from the 2017 Toyota 4Runner.  The fuel economy out of this massive machine is actually not abysmal as you think!

The 2017 Toyota 4Runner is one of the last new SUV’s you can get with a body-on-frame construction, making it even more unique to drive and own.

Like many other competitors in this interesting vehicle segment, the 4Runner is equipped with Crawl Control and terrain settings to help the massive machine through difficult situations, giving you more confidence in the drive. 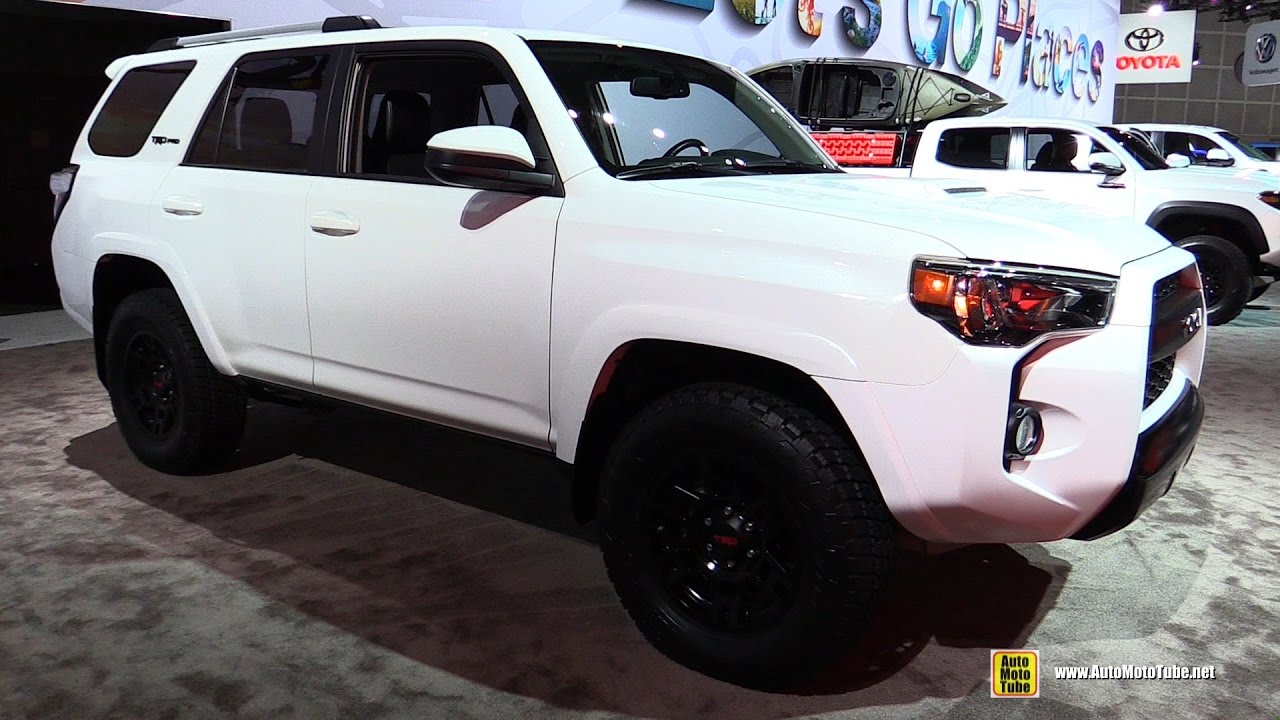 One trim that really gets any job done is the TRD trim.  It is an off roader that is dialed up to 11 with performance shocks (for off road driving) and a new skid plate.  It is a very impressive vehicle, and I believe that the TRD edition is exactly what the 4Runner should be.

The lone engine that is available for the 2017 Toyota 4Runner is a 4.0 L V6.  This engine is mated to a 5-speed automatic that seems to be dated as well.

The 2017 Toyota 4Runner is just as the vehicle has been for years.  It’ll be interesting to see what happens to the big SUV in the near future as it ages, but I can’t see the model lasting too much longer in Toyota’s dynamic line up without a huge increase in sales.  You can expect a release date for the 2017 Toyota 4Runner in Spring 2017.