Big. Executive.  Sedan.  The BMW 5 Series has always been a pinnacle of dentists and tasteful adults forty years and older.  Ever since the 5 Series was born in 1972, it has constantly set the bar for full size sedans across the market which means the redesign has quite the shoes to fill (which, being a BMW 5 Series, are probably Salvatore Ferragamo loafers).

It’s a big, executive sedan that just got bigger and more executive.  But BMW is also faced with trying to please everyone who have come to love the “Ultimate Driving Machine”.  The Bavarians are very good at making these sort of things, and making sure they are relevant for years.  The outgoing 5 Series is still a very sharp cruiser to this day, but the new banker’s mobile is faster, stronger and smarter than ever.  Let’s talk about the new 2018 BMW 5 Series. 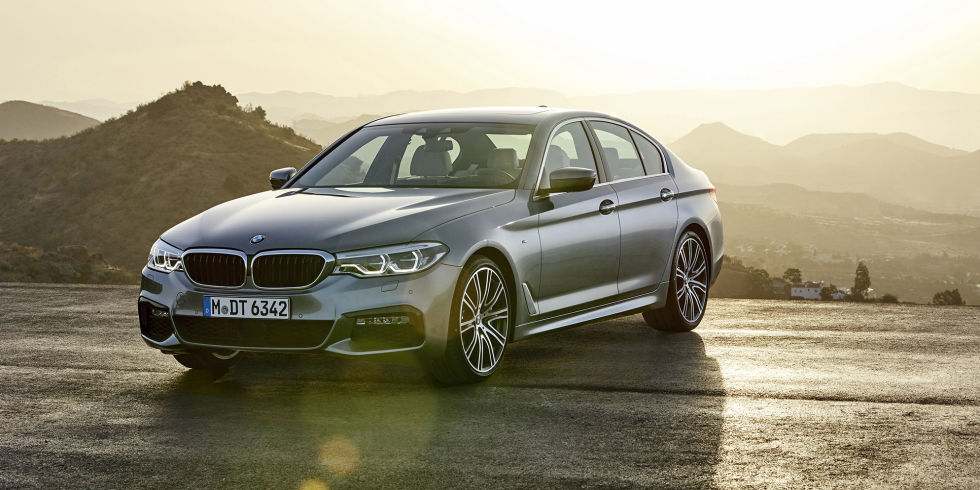 BMW is famous for designing a great looking sedan and letting it sit for 5-7 years.  And why not?  They design great looking sedans.  The design is meant to last years with only minor updates and tweaks before a full redesign, and BMW is the best at this game (Maserati has quite the case, though.  Look at the GranTurismo).  Just like fine wine.

The new 5 Series is an absolute stunner.  The car turned out even better than all the artist renderings we’ve seen from beamer fans over the last couple years.  It has an incredibly aggressive and much more imposing face, with large-but-not-too-large intakes to help it breathe.  The kidney grilles are in all their glory upfront, with connecting headlights with the evolutionary halo pattern we see on many high-specced BMW’s nowadays.  This new car looks even more athletic and muscular than the previous generation as well. You can see that it is essentially a shrunken (if shrunken is the right word) 7 Series, which is a good thing. 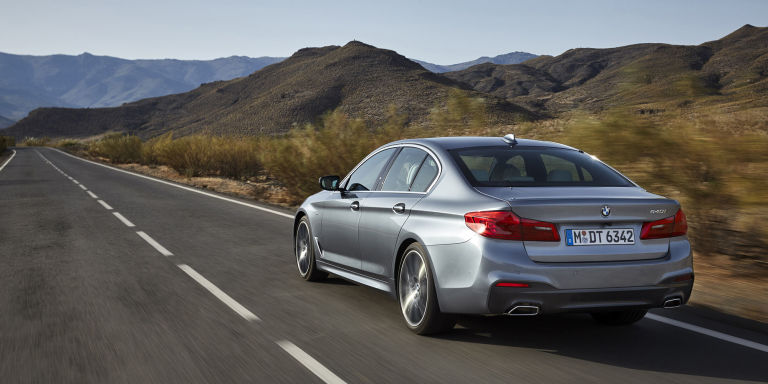 It does take a lot for a car to be able to pull off silver very well.  From this rear view, you can see a little opening by the back of the front wheel arch for some aerodynamic help.  Very clever.  But zoom out and you’ll see the prettiest 5 Series ever.  It is very professional looking and has a character that imposes its finely tuned nature and athleticism on smaller, more average cars around it.  It’s not necessarily like driving a middle finger around (like the Cadillac Escalade) but it’s pretty close.  As with any BMW, I’m excited to see how well the design ages and how it grows throughout the years.  For now, BMW did a fantastic job.

The new BMW 5 Series is a wonderful place to be.  Upon sitting inside, you’re immediately reminded you’re in something special.  Technology is all around you in a very modern and sophisticated layout, with the new redesigned steering wheel in your grips.  The bolstering is thick which makes it immediately apparent that you’re in a sports sedan.  BMW has had a similar layout to their center stack in their cars for years, and that is present in this new 5 Series.  The dashboard is remastered and cleaned up for a wonderful, familiar experience.

Now the tech inside of the new 5 Series is truly a marvel.  You can control the fancy iDrive system through the large touchscreen display, the iDrive controller on the center console and BMW’s new gesture control.  This new tech borrowed from the 7 Series uses a bunch of sensors so you can change the volume, radio stations and air conditioning by waving your fingers around like a 13th century monarch.  While this system is a bit complicated and not as efficient as it could be, I’m excited to see where gesture control could be after a couple years of fine-tuning.  The lane-keep assist is also very accurate; tests point to having as much as 40 seconds of pure auto-pilot before having to grab the wheel while on the highway.  The new 5 can also parallel park itself, and reserve parking at ParkNow sponsored garages.

The new BMW 5 Series can seat five adults comfortably.  The leather is subtle and the whole cabin rings with refinement. 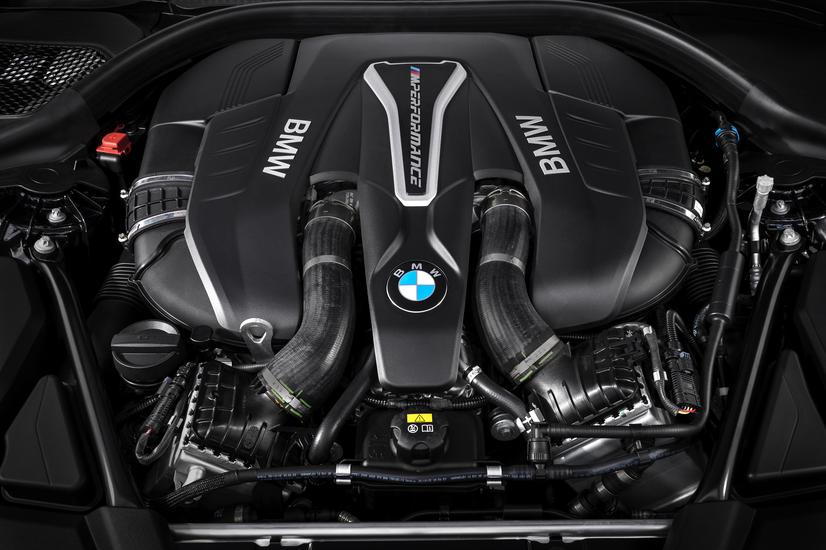 The new BMW 5 Series’ performance has made some headlines lately.  For starters, the base model (530i) will receive BMW’s potent 2.0L turbocharged four cylinder engine, producing 248 HP and a similar number in torque.  The 540i will feature a turbocharged 3.0L straight six producing an athletic 335 HP, which pushes the large sedan from 0-60 in an impressive 4.7 seconds.  The diesel line up will consist of the 520d which features a 187 HP 2.0L powerplant and the 530d which houses a 261 HP 3.0L I6.  In the future, we can see the addition of a range topping 550d xDrive that has a jaw-dropping quad-turbo 3.0L that’s good for 395 HP and 560 Lb-Ft of torque.  Wow.  Every option will be married to an 8-speed automatic transmission and  as always, each trim can be paired with BMW’s xDrive.

Then we have the M550i that is due this year, and will have a monster under the hood.  The M550i will hold the spot as the most powerful 5 Series until the M5 arrives.  You can expect a 455 HP twin-turbo 4.4L V8 in the M550i. The engine rockets the sedan from 0-60 in four seconds.  Insanity.  Imagine what the new M5 will be like!

The new 5 Series is a plethora of technology and German engineering.  It’s big, luxurious, quick on its feet and feels as expensive as ever.The pictures don’t do this machine justice, either.  In person, the 5 Series is imposing and attracts a lot of attention.  The new guy has all the makings of a great luxury full size sedan; I can’t wait for that M5.