The 2018 Porsche Cayenne is Porsche’s answer for all those giant SUV’s upper-class soccer moms drive around.  It seemed (And still kind of does) like big SUV’s were just not what a sports car manufacture does.  But that sort of market has just been getting hungrier and hungrier, so the unlikely brands had to react.  For example, take a look at the Aston Martin DBX, Bentley Bentayga and so many other manufactures jumping in.  Maserati included.

It almost seems like Porsche was the trailblazer for this theme.  The first generation Cayenne met customers in 2002.  To be honest, it always kind of looked like a bloated dolphin (and I like the Macan a lot better) but I’ll attempt to keep my opinions to myself.  In the world of uber-SUV’s, it’s all about who can be the most big and flashy as possible.

In 2018, the Porsche Cayenne is getting a few different updates and refreshers.  While the same formula will be applied and not much is changed on the outside, there are some talking points. 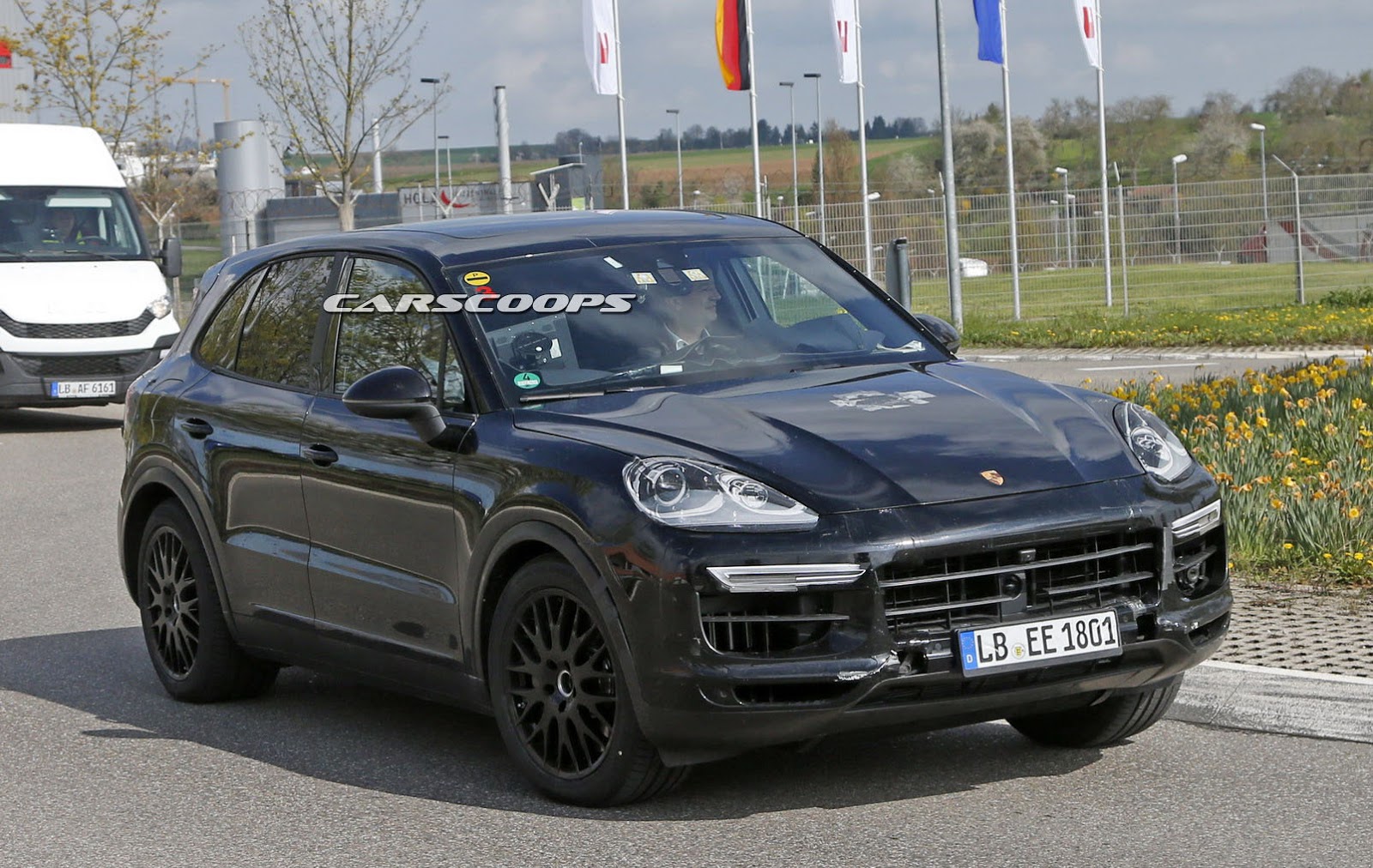 Here is Porsche’s latest bloated dolphin.  You can see how the chassis is struggling to hold the weight of the thing.

Okay I’m just being harsh…The SUV is just heading around a corner, and you should never judge the final stance of a vehicle on a test mule.  Anyway, you can see that the front end is slightly refines and the lines are cleaned up a bit.  There is also a possibility of the headlights being updated to Porsche’s cool looking quad-square design which I’d really like to see on the Cayenne.

The rear is much the same story as the front in terms of how many changes there are.  The new Porsche Cayenne for 2018 has only very slight reworkings compared to the 2017 model.  It is still large and in charge with a familiar face…and butt. 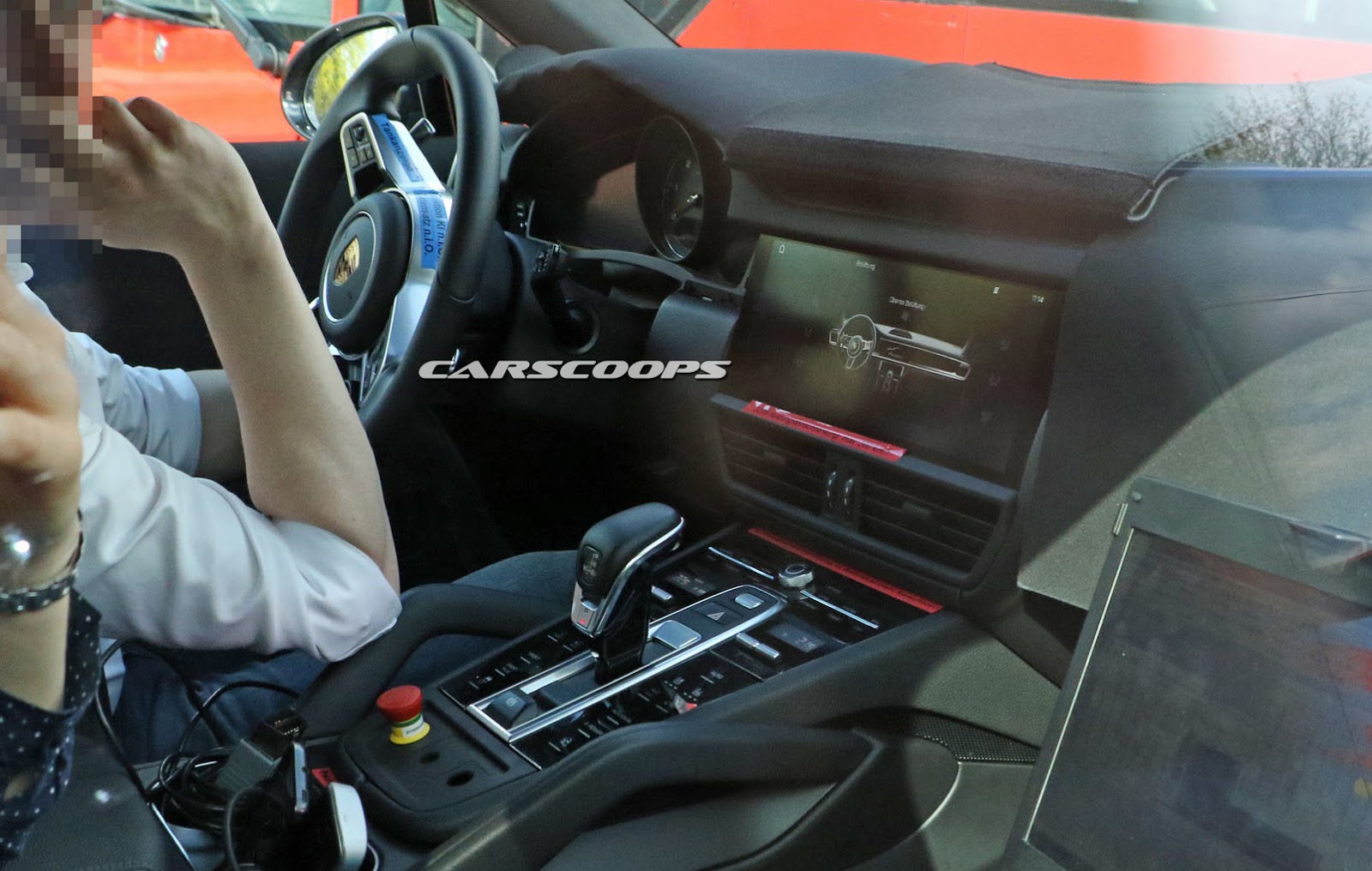 Now the Interior of the 2018 Porsche Cayenne is where most of the changes are.  There are no more buttons here.  Everything on the inside as far as controls seem to be solely touch-controlled, or some sort of sensor.  The instrument cluster seems to be mostly digital as well, following the new technology trend in here.  As you can see, the spy shot shows the infotainment display projecting an image of the dashboard, which points to some sort of air customization for the center display.  Other than that, the Cayenne’s center tunnel features (what looks like) touch sensitive controls or small buttons to control different functions.  Zooming in, the “Park” function for the transmission is that little red light on the silver part of the shifter.  The parking brake is electronic, and located at the base of the shifting tunnel.

The seat heaters and air conditioning is located on this tunnel as well, near the top as small LCD screens.  Overall, the layout is very clean and simple.  It doesn’t look clustered at all, which means ditching the buttons was the right move to take.  As long as it all works properly.

The Cayenne offers a healthy number of engine options for its range.  For 2018, there are talks of a plug-in hybrid, full electric and other V6 options.  Judging by Porsche’s push to electrically powered vehicles, we should see an either full electric option, or an update to the e-drive Porsche Cayenne.

This plethora of engine and performance options means the 2018 Porsche Cayenne prices range from $59,600 for the base model, and all the way to $159,600 for the Cayenne Turbo S.  A one hundred thousand dollar price difference in the same vehicle range from the manufacture sounds like a joke, but they were able to really pump everything they could out of the Cayenne.

The 2018 Porsche Cayenne has the luxury of having a bit of DNA from every past generation of it.  This new one is the cleanest, highest-tech and professional Porsche Cayenne to date.  I love Porsche’s interiors and how simple but impressive they are.  You can see more and more that Porsche takes little cues from the mighty 918 Spyder and applies them to their range.  Mainly that center tunnel that has the infotainment controls.

Regardless of what you and I think, the 2018 Porsche Cayenne will feed into its customer base very smoothly.  We can expect a release date in fall 2017 for the 2018 model, and perhaps a full redesign after that.

The 2016 Porsche Panamera: Evolution Of The Dolphin