It seems like the 2018 Toyota Camry has been stealing some number of headlines recently.  For those of you who don’t know, Toyota is redesigning the Camry for 2018, and it looks pretty good.  As one of the best selling cars ever, redesigning the Camry is definitely a difficult task.  However, people seem to be really enjoying what they see.

For years the Camry represented the office worker who only cared about getting to and from work and cookouts and barely servicing the car.  While the car is without a doubt incredibly reliable, it did lend itself to the market that don’t really care about cars.  That’s not a bad thing, it’s one of the best selling cars ever.  Clearly they’re doing something right then.

I remember seeing this at NAIAS and my first thoughts were about how it looked nothing like the name “Camry” implies.  It is a strong looking sedan, with some insane front fascia.  It is becoming more and more apparent that Toyota is taking feedback from Lexus designers with the styling of those slashing and very un-Toyota lines.  Take note of the new roof line that the 2018 Toyota Camry sports as well.  The black off set really makes the body lines unique to the roof and give it a very strong coupe feel.

This is the rear of the 2018 Toyota Camry XSE V6.  The top of the line Camry offers those super awesome quad exhaust tips that make any car that they’re on instantly cool and fast…right?

Even though the four tips look cool, I can’t help but think that they just don’t belong on a Camry.  Maybe I’m not open minded enough to accept it, but while the car does look great, the quads just don’t seem fitting here.  What do you guys think?

The new style of proving itself has continued into the cabin of the 2018 Toyota Camry.  The screen and infotainment system are very cleanly integrated into the dashboard, and there are some really unique design elements at play in here.  For example, the swooping lines from the right of the gauge stack to the right hand side of the cup holder, and the way the wood inlay falls into the bottom of the infotainment system are really something new here. 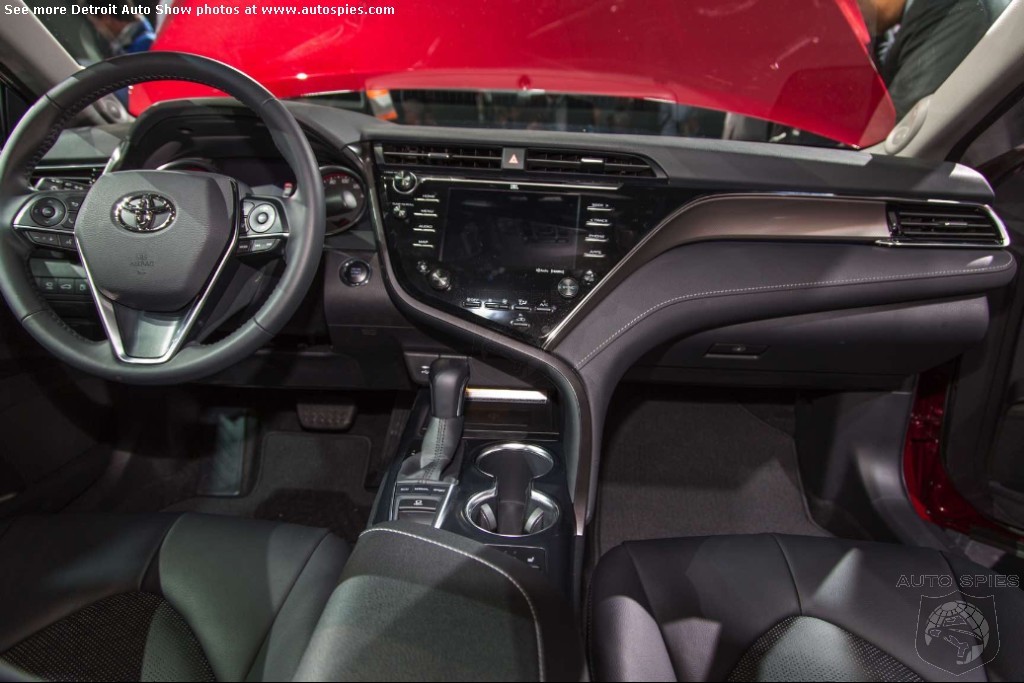 The leather is nicely bolstered and the tech is very up to date.  The 2018 Toyota Camry will seat five adults in economical comfort.

The chassis for the 2018 Toyota Camry is now lower and wider than the outgoing model, to help fit its new sporty dynamic.  The V6 is still an option for the Camry, which surprised a lot of people.  The revised V6 in the new Camry will produce 295 HP and 263 lb-ft of torque.  Which, from a 3.5 L V6, doesn’t sound like a lot.  But that is more than enough to feel some kick in this mid size sedan.  On the base level trims, you can get Toyota’s improved 2.5 L four cylinder engine which is expected to output 178 HP and 170 lb-ft of torque.  With those two engines, an 8-speed automatic transmission comes standard on the 2018 Toyota Camry.

On top of that, the new Hybrid that uses the 2.5 L four cylinder paired with a motor will get more HP and get the same fuel economy as the Prius.  Impressive stuff there.  Another cool touch is that Toyota is offering heads-up display on the Camry for 2018, which makes it one of the first mid-size sedans to do so.

I do want to bring something up about Toyota and Lexus.  Between the quad exhaust pipes and the insane styling of Lexus, you can tell that Toyota likes to design cars that look fast.  All Lexus’ look like they can rip the fenders off the Germans, but they can’t.  Toyota’s 2.5 L N/A four cylinder produces shy of 180 HP, while turbo four’s from other manufactures are able to pump out as much as Toyota’s 3.5 L V6.

There are a huge number of factors why Toyota shies away from smaller turbocharged engines (costs being one…But Lexus?) and the customer base of Toyota, not Lexus, aren’t 100% concerned with 0-60 times, which defeats the purpose of power.  With that said, why are there quad tail tips on a car with an under powered V6?  I feel like a keyboard warrior right now, but think about it.  Aggressive styling should be coupled with aggressive performance, and Toyota’s cars just aren’t up to speed (performance pun) with competitors.

I do like how the 2018 Toyota Camry looks.  I think that if Toyota redoes their V6 and even their four cylinder, we could get a good punch with the car.  Regardless of what I think, the Camry will sell well.  Plus, the new refreshed look will bring in new younger buyers without scaring away many of their dedicated base.  Overall, it looks to be a win for Toyota.  Look for the 2018 Toyota Camry’s release date around late 2017.