Toyota is one of the most decorated auto manufactures in the world.  They create some very unique and amazing cars, trucks, SUV’s; You name it.  Some are super rare and amazing fun to drive, while others smash production and sales records with ease.

Toyota has the track record that make sit easy to say that they know exactly what they’re doing.

One of Toyota’s most notable cars on the production line these days is the 86.  You might know the Toyota 86 better as the Subaru BRZ or the late Scion FRS.

This platform is not a very powerful one, but the cars that spawn and are re-badged for the 86 do drive incredibly well.

Another honorable car that Toyota produces is one you might be more familiar with, the Toyota Camry.  One of the most popular cars ever produced.

Passed that, Toyota is remaking the vast majority of their lineup, and adding in a new face into the line up, called the 2018 Toyota C-HR.

If the C-HR isn’t of interest to you and you have a bit more money to shake around, the new Toyota Land Cruiser might be more up your alley.

The Land Cruiser apparenty started loosing its luster years ago, as it gets more and more aged compared to it’s competitors.  People just don’t want a Toyota for Land Rover money.  Therefore, the Land Cruiser sits in an odd spot.

But if anyone can re-coop the loss on the Land Cruiser, it will be Toyota.

So today, we will discuss the 2018 Toyota Highlander.  A large SUV that sits in the product line up just below the 4Runner and just above the RAV4 at a starting price of around $34,000.

The Toyota Highlander is not a car made for fun, and that has been Toyota’s lingering problem.  For years, Toyota’s competitors have made fun cars for enthusiasts like the Honda S2000, Subaru WRX and more.  Toyota has seemed to go out of it’s way to not make anything fun.

While we respect Toyota endlessly, we need something cool.

The car isn’t being redesigned as many cars are for 2018, but the 2018 Toyota Highlander gets a couple updates to help it keep up with competitors.  Are they minimal?  Yes, but the brand is clearly worried about other things at the moment.

Toyota’s have never been necessarily exciting or stunning by any means.  Since the Supra, Toyota’s real design muscle has landed in their luxury division; Lexus.

When thinking of the Japanese automaker, striking design never really comes to mind.  This is okay though, since Toyota is most concerned with making cars that are reliable, safe and fuel efficient (most of the time).

For the past few years, Toyota’s luxury arm Lexus has been almost intruding on Toyota’s design plans.  Between the 2018 Toyota Camry and the 2018 Toyota Corolla, we see more and more Lexus design cues.  More slashing lines and sharper angles.

This is in an effort to divide Toyota customers in a way, since more Toyota customers are practical and sensible, they usually stick with the same car for a number of years.  Usually people who own Toyota’s end up giving in and getting…another Toyota.

Lexus and Toyota realize this, and want to regain some more excitement into the brand, which explains the styling switch.

We see this with Honda as well, as the regularly plain and unexciting lineup is becoming something much more edgy.  As a young man, I like this change.

More specifically, the Toyota Highlander has never been a beautiful example of design.  It is more of a purpose designed vehicle rather than a form designed vehicle.  Again, nothing wrong with that.

The new Highlander for 2018 features a very uncomplicated front end, even though it may seem a bit overwhelming at first.  It is actually made up of pretty simple elements.

There is a big front grille that takes up most of the front end, and the grille is made up of one incomplete box.  There are some horizontal lines to help visually break it up, but its a simple design.

Highlander’s headlights combine into the shape of the grille and are a very generic shape.  Very plain but functional.

The whole front end of the 2018 Toyota Highlander isn’t a breath taker, but it knows that.  The SUV is more for those who like to have an SUV just to get the job done.

From the side, the Highlander is just as standard as the front.  Much like a big brother to the Toyota Camry or Corolla.

In the back, the new LED signatures in the lights add a more aggressive tone and make the new Highlander look much more appealing and upscale.

Again, things are very simple in the back but it goes well with the whole look.  The professional looking LED signature looks great here.

Overall, the 2018 Toyota Highlander’s exteriors is a plain one, with only a few little bits of personality sprinkled in.  Edgy and sharp, but a professional and purposeful finish.

I know that Toyota is adding in some very interesting additions to its line up elsewhere besides the highlander, so people who want a really daring looking vehicle can shop around.

Much of what I said about the exterior for most Toyota’s goes the same way for the interior’s.  Nothing really compelling, more like just get the job done.

This, along with pretty much everything else Toyota does proves to be a winning formula somehow.  Toyota interiors are all very straight forward and more or less basic affairs, versus their luxury counterparts at Lexus.

Lexus is more up my own alley.  The interior’s inside the more modern Lexus models are absolutely stunning and so elegant.  They feature an array of leather and fine metals so pleasing to the eye and touch.

The inside of the 2018 Toyota Highlander doesn’t really get anything from the Lexus counter parts; It is pure Toyota.

The steering wheel is a nice one, both classic and modern at the same time and it has great ergonomics.

There is the most awkward and lonely strip of wood on the passenger side of the dashboard that just looks funny where it is.  I get that it breaks up the dashboard, but the wood just looks so misplaced here.

Toyota’s navigation screen is pretty small inside the Highlander as well, which puts it a bit behind some competitors in terms of technology.

The screen below the navigation is for the air conditioning, which again looks pretty awkward when you draw attention to it.  The small LCD screen displays what you do when you fidget with the climate in a type of early 2000’s fashion.

Above the navigation screen, you have the smallest LCD screen on the planet dedicated for the clock. As well as some information lights.  I can’t help but think there has to be some sort of better option for Toyota to paste up there. 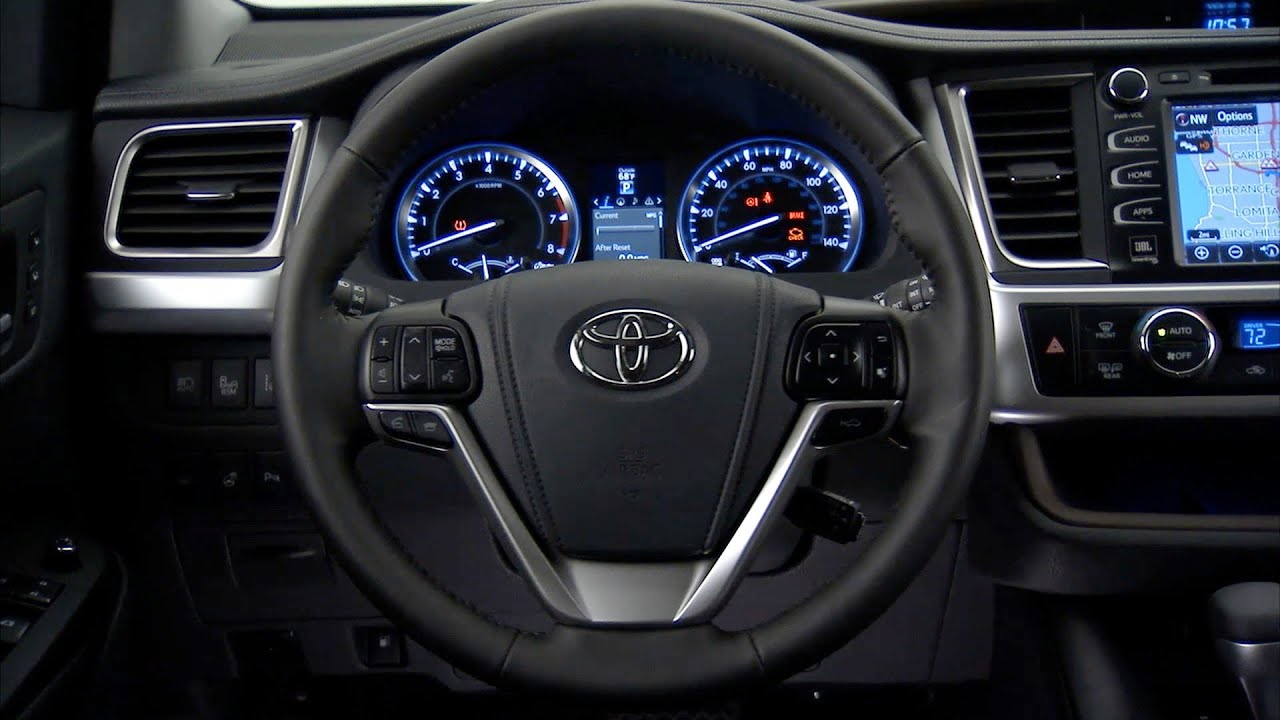 Other than the awkward shaping inside the 2018 Toyota Highlander, the interior is pretty straight forward.

The instrument cluster is decently plain, and there is even seating for eight people inside.  A a fantastic stretch for any family to sit comfortably.

Outside of the dashboard things are very self-explanatory.  Simple seats, simple layout, simple design, simple everything.  The rear seat climate controls are also sponsored by an LCD screen right on the center of the console.

People who buy the 2018 Toyota Highlander don’t really need the extra lavishness that comes from the brands sister Lexus.

Starting at $34,000 with no options, the Toyota Highlander is positioned around a number of SUV’s that are more updated and even more luxurious feel.

Passed all of this, things are plain and you’d be smart to pick one up for function over form.

Another issue that Toyota has had for quite some time, and this ties back into the introduction, is the fact that they don’t have any stand out performers.

Even in Lexus, only Lexus-specialty-made engines like the LFA V10 and the LC500 V8 really make some decent and impressive power.

Anything other than those two from Toyota or Lexus, just isn’t worth mentioning.  The GT86 and its sister cars are just not what they could be at all.

Toyota makes 3.5 L V6’s that we see in a number of other cars and it under performs in nearly every application.  Just under 300 HP from a 3.5 L V6 is a very outdated number and it should be much higher.  Plus, the fuel economy could be better.

Toyota makes incredibly reliable engines, without a doubt.  The only issue is that they play it way too safe, in a way.

Toyota has said before that the option of turbocharging would make their engines less reliable, and that is the main reason they shy away.

However, I’m sure with proper development and testing, a turbo charged engine will bring the performance up to speed with others (performance joke).

The 2018 Toyota Highlander features an industry-rare 2.7 L four cylinder engine that receives a modest 184 HP, which is below the standard in this segment.

Usually, we see a 2.0 L four cylinder with a turbo bolted to it, and it produces better numbers. Somewhere in the neighborhood of 250-270 horsepower is regular.

As for the 2018 Toyota Highlander with larger engines, you can get a 3.5 L V6 engine that produces just under 300 HP, as I said before.

This is plenty power to get you where you need to go, but is lagging behind what other brands have up their sleeve.

Toyota’s entire line up does need a good update performance wise.  Nothing is really compelling or impressive from the Japanese make.  The closest we have is the GT86 which is great in corners, but won’t put your head into the seat.

To be taken seriously, Toyota needs more umph.  Even Lexus, with their impressive style on new vehicles are bogged down by lacking engines.  Slaughtered by the German’s in performance.

I do like the 2018 Toyota Highlander.  It knows its purpose in life and fills it perfectly.  Toyota knows how to make reliable SUV’s and the Highlander is a historic example of this.

For years, the Highlander represented quality at a modest price.  For an MSRP of around $30,000, you can’t really beat it for what it has to offer.

The 2018 model year doesn’t hold any secrets for the SUV, but new technology is coming according to Toyota.  Engine technology for efficiency.

The 2018 Toyota Highlander will have a release date later this year most likely in the fall time.

You’d be hard pressed to find a more sound choice than a good – old Highlander, but I hope you don’t want to go anywhere fast or try to pass anyone on the highway.  Just cruise along.

If style is more you’re thing, Lexus is up your alley.  If performance is more your deal, there are plenty of other options to help get the job done.