New Cars Release Dates
Home By Manufacturer Jaguar The Jaguar I-Pace: What We Can Look Forward To!

Just like any other rational human being, I think concept cars in general are awesome.

Concept cars are made to make the manufacture look good and seem like they’re on the cutting edge of design and technology.  Usually manufactures promise possible consumers that their concept car will be on the road soon as well.

Well if you know much about the car world, you’ll know that all the promises and hype that car manufactures promise along with their hot new cars never really comes true.  Most of the time we get a re-hashed thing with some distorted version of the  concept car we’ve seen, but never the same thing.

This has always made me sad.  I always loved what I saw at car shows around the country for years.  Manufactures pushing the boundaries of technology and design, making beautiful machines for road use.

When the real car came out, I was always disappointed.  Especially when the concept didn’t even make it to production like the Chrysler ME-412.  Do you remember that?  A true American Super car with a Mercedes V12 engine.  I’m still mad to this day.

The fact you can take from all this rambling is that manufactures need to actually make concept cars into road cars.  I know that there are all sorts of restrictions and whatnot as far as design goes, but even something remotely close would be nice.

It seems like auto makers are getting more in tune with consumers and making concept cars that actually end up going into production.  Instead of something re-hashed like the past, the new concepts are actually more similar to the production version.  I can definitely get behind this.

One of the finest examples of this new practice is the Jaguar I-Pace.

We’ve seen plenty of car makes going after this unicorn of the perfect electric car in recent times, and Jaguar seems to have a great footing in the race.

Between Tesla, Faraday, Lucid, Rimac and all the other electric car competitors out there, Jaguars new I-Pace looks to be a serious player.

Combining the whole concept car thing and electric cars, the Jaguar I-Pace seems to be coming at a perfect time.  As the industry gets more daring and bold, the I-Pace is right at home.

The Jag SUV has been in development for some time now, and we should see it on store shelves in the coming year or two.

The Jaguar I-Pace SUV actually looks like a fantastic machine.  It is boldly designed; I guess you could say very Jag-Looking.

What makes me the most happy about how the I-Pace looks is that it really has personality.  It’s aggressive.

Mostly we see these new electric cars with as much personality as a microwave.  It makes it that much worse that electric cars could be our future when they are as dull as they look.

So the I-Pace is a lovely fresh breath of air.  The vehicle is beautiful and distinct in a seemingly going world of refrigerators.   Plus, Jaguar has said that they are keen on focusing their efforts to make it as much of a drivers car as possible.  Even with an electric motors brigade to power the I-Pace. 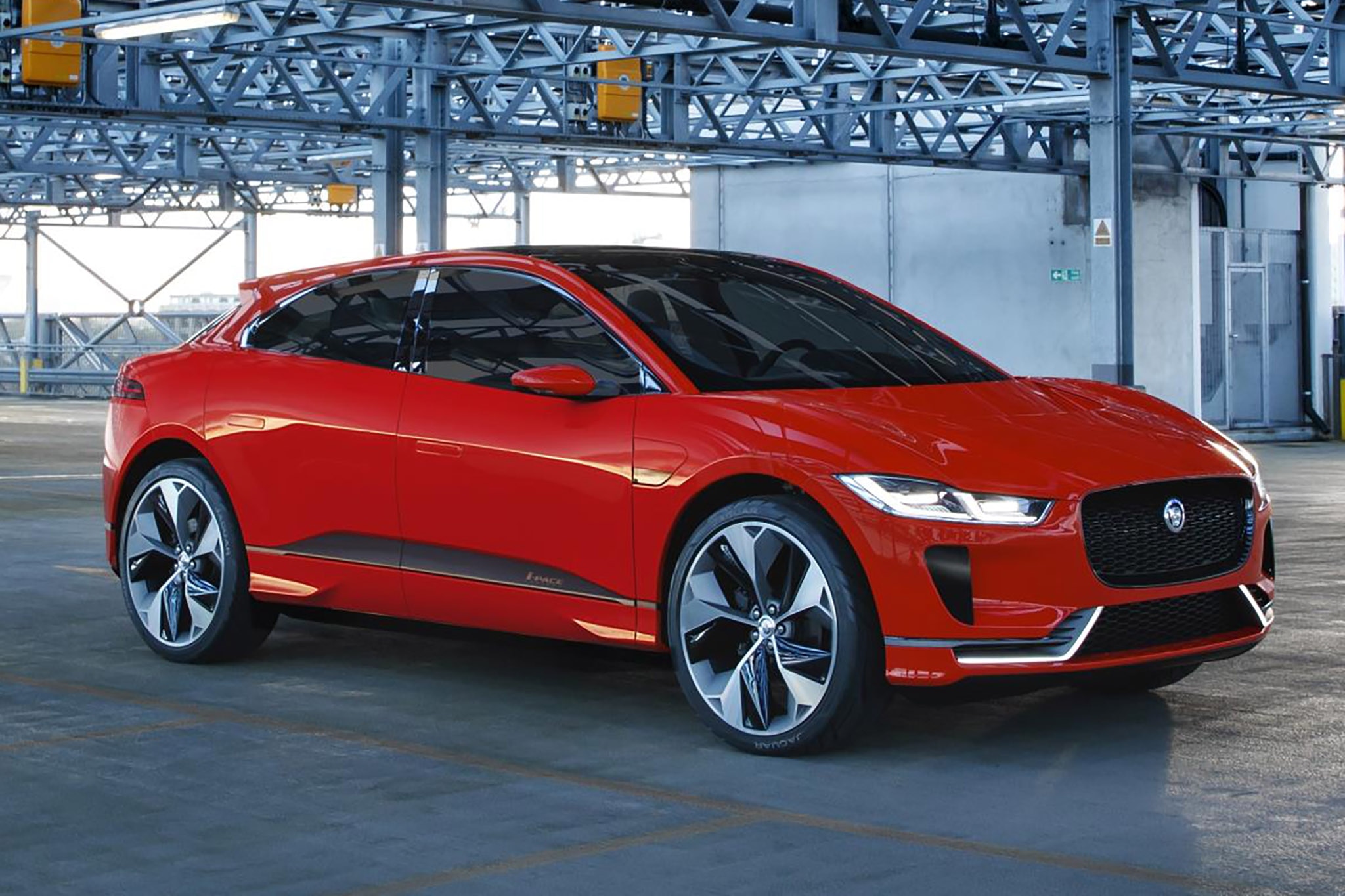 As with any Jaguar currently in the brands lineup, the Jaguar I-Pace adopts a lot of the aggressive nature and athletic proportions.

While the I-Pace is a large vehicle, Jaguar made it look sleek and powerful.  Much like the Brit’s did with the F-Pace SUV they released recently.

Speaking of the F-Pace, I love it.  Making an SUV look as dynamic and sporty as the F-Pace does is a difficult task, and a lot of manufactures tried to do similar.

But a lot of makes fall flat on their face and make a bubbly looking thing.  The F-Pace is a beautiful SUV for those who want a sports car but have a family to tow around.

The I-Pace in comparison borrows a lot of the same lessons Jaguar put into the F-Pace.  The wide hips, angry face, and overall sharp design are all present on both vehicles.

There are bulges over the wheel arches, menacing eyes on the front end as well as the rear end, low roof line and aggressive fascia that we see distinctly as Jaguar.

I-Pace sports some air ducts and a large grille, but on electric cars these add-on’s are more for looks since they don’t need as much cooling power as internal combustion engines.

Overall, the styling of the new Jaguar I-Pace should help to get that bad taste out of your mouth when someone says “Electric Cars“.  Usually electric cars bring to mind the Prius and other ugly econoboxes spring into mind.  I think that the I-Pace will help to change that.

Jaguar’s engineers have worked extensively to make the center of gravity on the I-Pace SUV to make the whole driving experience of the thing much more sporty and fun.  Fun seems to be a lacking characteristic of electric cars right now, so it’s good to see Jaguar taking initiative.

There are a lot of cues that come from each bit of the Jaguar line up.  The F-Type, F-Pace, XF and XJ has bits and pieces all around the new I-Pace project.  Even though the I-Pace electric SUV shares a lot from its brand brothers, the styling is blended together in a combination that looks great.

Nothing is too overbearing to my eyes, and the distinct Jaguar-ness looks fantastic.

The brands identity is stronger than ever.  It is clear that Jaguar learned a lot from the F-Pace SUV and how far the styling language has come in a short time.

Jaguar and Land Rover are both owned by the same company, Tata Motors from India.

Because the two brands are connected, we see a lot of similar styling on the inside of car and SUV’s from both brands.

This practice is very popular in the automotive world, as I imagine is costs a lot less to simply share ideas and parts across brands rather than develop everything from scratch.

It’s the same reason you see things in your Dodge Dart inside the Maserati Ghibli (I can rant about that another time).

Anyway, the Jaguar I-Pace’s interior is gorgeous.  Jaguar did a fantastic job all the way around and I really appreciate it…As long as it makes into production; No harm no foul.

If you like that sort of modern, slopey wood and leather type stuff, the I-Pace is for you.  I imagine someone or a group of people well versed in modern architecture and design was the mind/minds behind the I-Pace.

There are two large screen displays inside the cabin of the I-Pace for occupants.  One is for the infotainment and one acts as the gauge cluster.  Nothing too cutting edge there, as we see this sort of technology already in other vehicles.

There are a couple different images for the interior of the I-Pace and you’ll notice something interesting.

Drive selections like reverse, park, neutral and so on are controlled by buttons on the center tunnel, as we see in some other cars these days.

As I touched on earlier, there is plenty of natural wood all over the cabin.  In the color way we see on the car, the wood off-sets the leather surfaces on the inside beautifully.

It is very techy looking inside the I-Pace, which isn’t surprising at all given the kind of vehicle it is.  The I-Pace has an open layout and even a slide-out tray table on the passenger side so you can do things.  Very cool.

A key point in the back seat is that hated middle seat where the transmission usually hides underneath, causing the always bulge through the middle of the cabin.  When you sit in the middle seat in the back of a conventional car,  you have to awkwardly maneuver your legs around the tunnel.

Not in the I-Pace, though.  The Jaguar I-Pace doesn’t have a transmission, SO NO AWKWARD BULGE!

Overall, the interior has some exquisite stuff going on.  The materials and design are all top notch, and I do hope that it all translates well into the real car that goes into production.

Being that the Jaguar I-Pace is a Jaguar, performance and luxury are top points going into the project.

Jaguar promises the new electric machine will be able to do a zero to sixty sprint in just around 4 seconds.  Proper fast.

Horsepower will be around the 400 mark, and torque can be expected to be 516 pound feet.  Since the I-Pace is electric, the torque will be instantaneous.

On top of that, the I-Pace is expected to achieve around 220 miles on a single charge out of the battery pack that utilizes 90 kWh and can be charged 80% in 90 minutes.  I do expect that all these numbers will be a bit better when the vehicle is actually released though.

Suspension will be shared with the F-Pace, which just makes sense to me.  The ride should be subtle but refined and able to perform well under pressure.

The Jaguar engineers praise the I-Pace for its apparent ability in the corners, which is a good sign.  I’m happy to hear this since electric cars are usually completely numb and even more disappointing to drive.  The fact that Jaguar is taking their time crafting a driving machine rather than a blender on wheels makes me a happy person.

The new Jaguar I-Pace should be a strong contender in this new market of E-SUV’s that is slowly getting some new entries.

From Tesla to Audi to Jag, electric cars are really picking up some speed with consumers as we all grow a little more comfortable with driving something powered by electricity.

If I was to put my money on any of these entries into the E market, it would honestly be the Jag.  It looks the best, and seems to be the most livable.

I’m more of an old fashion person, as I’d rather have my car powered by explosions, and be able to hear the roar of an engine rather than an electric car.

Whether or not I like it, it seems cars are headed down the electric path, and I’ll have to come to grips sooner or later.

2015 Honda Accord Release Date and Review