Lotus as a company has had an interesting history.

The British company isn’t known at all for its number of sales or volume, but for the very distinctive cars they produce.

As with many great car companies, we see a young person involved in racing and modifying cars for the local race scene.

Back in 1948, a young man named Anthony Carl Bruce Chapman (the most British name I’ve ever heard in my life) developed a 1920’s Austin Seven to take out.  It won enough prize money to develop the next car.

The next car was another Austin Seven, which was dubbed the Lotus Mark II.

These cars developed the original Lotus formula of being super light weight, quick and responsive cars.  A formula pretty solid by the time the Mark Seven came around.

The Mark 7 is actually technically still in production today as the Caterham 7.  Interesting, isn’t that?

Eventually, Chapman had enough money to continue developing his own car.  It was called the Elite, and powered by a 1.2 L engine producing 102 horse power.  Connected to the Lotus formula, we’re looking at a weight of 1700 pounds and a small engine with great handling.

Next came the more widely known Lotus Elan, which featured a steel frame.  In 1964, the Elan was capable of producing a 7.1 second zero to sixty time which is pretty impressive for a car of that era.  Even by today’s standards, that’s not bad.

Ford and Lotus eventually teamed up and made the Ford Cotina.  It was powered by a collaborated effort 1.6 L engine.

In 1966, Chapman built his first Lotus car with a mid-engine, called the Europa.  The Europa is a very pretty car, and would pave the way for future greats from Lotus. 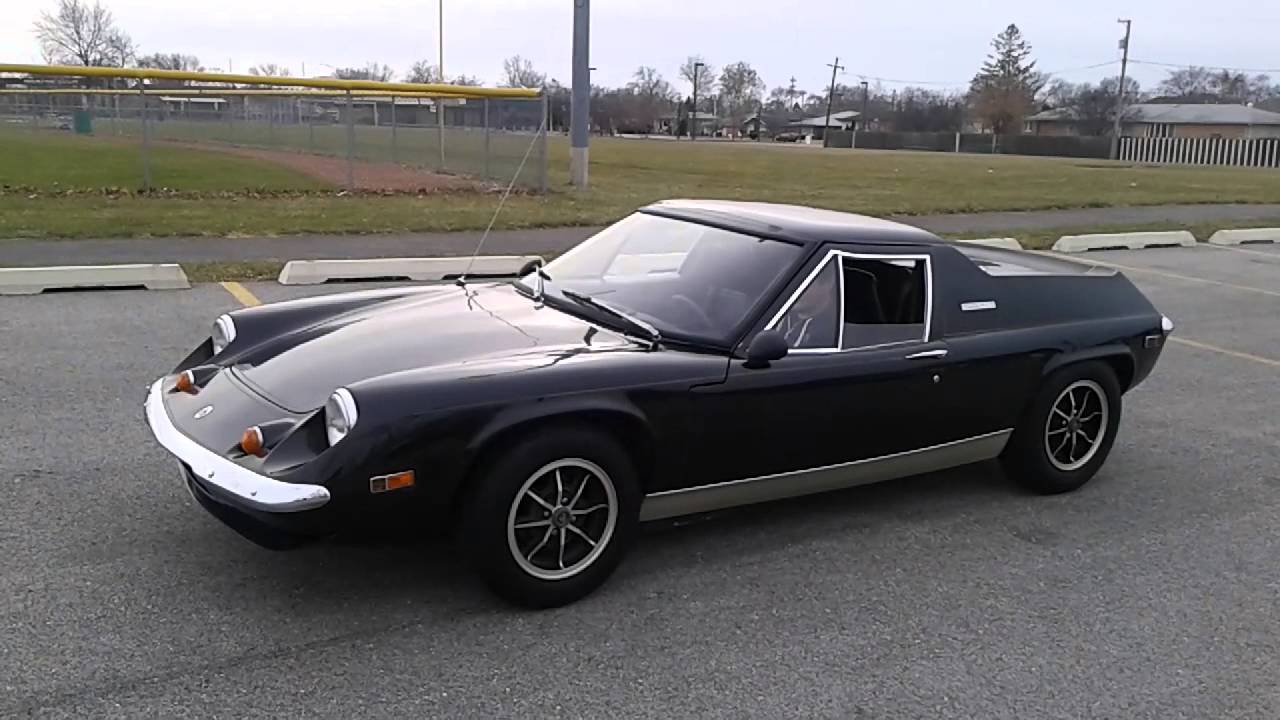 Lotus’ history is an interesting one, and it led to the modern offerings from the company which include the newer (but with some recent history) Lotus Elise, Lotus Exige and Lotus Evora (generally speaking).

When the Lotus Evora was released initially, people wanted to call it the 911 fighter.  That alone warrants a lot of speculation, since the Porsche 911 is as great, legendary and popular as it is.  Any car that comes along trying to contest it is met with a lot of scrutiny.

The Lotus Evora 400 is the most powerful and fastest Lotus road car for sale.  It is largely improved since we’ve seen the beginning of the Evora, and promises to be more advanced as well.

The Lotus Evora makes use of some great technology, and it looks great.  The 400 version has things dialed up to 11, as you’d expect from a performance version of a performance car.

Originally, I wasn’t crazy about the Lotus Evora.  The styling wasn’t compelling, and kind of looked out dated very quickly.

There are a lot of points on the Lotus website where we see the manufacture call its performance “super car”.  This is just wrong.

Lotus is using the same marketing technique that Chevrolet uses on the Corvette Z06.  They call a performance version of a sports coupe a super car.

You just can’t dress up and inject steroids into a sports coupe and call it a super car.  The world doesn’t work like that.  It dulls down real super cars and confuses consumers.  Lotus isn’t as bad as Chevy is with throwing the “super car” name around so loosely, but it’s still pretty bad.

Plain and simple, you can’t call a performance version of a more normal car a super car.  Super cars are made to be super cars from the get go, and specialized for the job.

Okay, my rants over…

I don’t want to take away from the fact the Lotus Evora 400 is a great car though.  Because it is.  Other than the jokes people make about Lotus reliability.

As I said before, I’ve never been a fan of the exterior styling of the Lotus Evora.  Given the other products in the line up were the Exige and the Elise, the Evora seemed like an odd-ball in terms of styling.

It didn’t really say Lotus when it came out as a design, and it seems like the market (at least slightly) agreed with me.

However, I do like how the Evora evolved a bit.  The whole line up did, really.

The older styled Lotus Elise and Exige had more of a bug face, but they had such a go-cart look to them and it fit incredibly well.  They were tiny, nimble, quick and looked every bit of it.

The new Exige and Elise are largely the same, but the styling has been completely updated.  Lotus’ new cars are clearly trying to make a new name for themselves, and I’d say they are doing a very good job of doing so.

Lotus now only offers the Evora in 400 and Sport 410 trims, which means the rather intense 400 is the base level model. Not really an issue, though.

The Evora’s new body is a very aggressive one with all new intense air ducts and active aerodynamics.

Up front, there is a massive intake in the front bumper along with very large secondary air ducts.  This look is much more assertive over the rather sedated look of the previous Evora models.

The side of the car is largely the same as we’ve seen for some time.  A very sharp roof line and a slender design on the side skirts.  This makes the car appear slimmer through the middle.

From the back, the Lotus Evora 400 is pretty much the same car it’s been for the past few years.  It doesn’t look as intense as the front end does, but it is the most “Lotus” part of the car.

You get a large central exhaust outlet and a redesigned active wing that looks great.

The rear end gives me a vibe that it wasn’t made to be beautiful or appealing to stare at (though it kind of is) but it was made to be purposeful. Overall, the look of the Evora 400 is a pretty track toy.  It looks at home on the track but like a ton of fun in the streets.  I’m not sure where Lotus is heading with the Evora, but it is a very sharp sports coupe. The interior of Lotus’ cars are historically plain and focused on driving and that is all.  In the Lotus Elise and Exige, you only really get a small metal bar to separate the passenger and the driver.  I love things like this.

Life isn’t totally different inside the Lotus Evora 400.  You get a pretty standard place to sit but with some clear efforts to make things look pretty.

Instead of a simple metal bar separating like the Exige or the Elise, you get a proper center tunnel.

A 6 speed manual transmission is right where the driver needs it, and the whole thing is wrapped in nice leather and suede.

The whole interior is less driver focused (even though it most certainty is a driver-focused place) than the Exige, with suede and leather pretty much everywhere.

The seats are bolstered very nicely and the leather stitching is high quality.

Lotus made the dashboard of the Evora 400 a simple but pretty one.  The steering wheel is updated with new functions and wrapped in suede as well.

You get a pretty standard looking infotainment set up, like one you could probably get third-party and install on a Sunday afternoon. 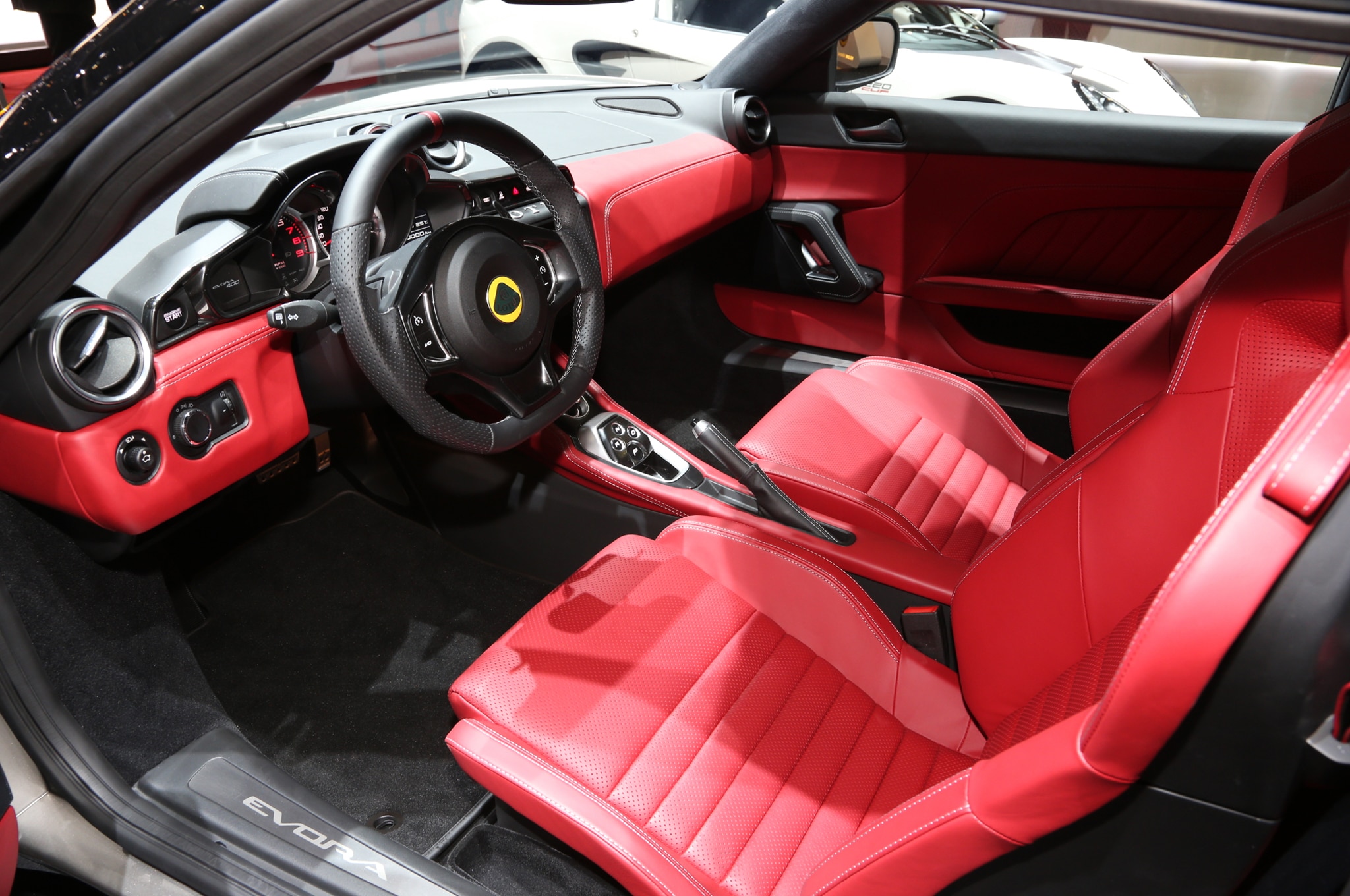 I like the interior since it is more luxurious than the Exige and Elise, but it doesn’t try to be something it isn’t.  It is still a focused, business-only place but with enough nice touches and seating to set it apart.

There aren’t any silly blank buttons or anything to make it look cheap.  You even get a center layout with buttons for heated seating, sport mode, race mode, active exhaust and door locks.  Civilized but with some fun party tricks.

As with Lotus, performance is very important and very trademark for the brand.  Lotus’ cars are pretty much go-carts for the road in most cases.

The Exige and Elise are incredibly nimble and easy to handle, and there is plenty of proof of that on YouTube and nearly every other place you can look on the internet unless you’re in North Korea.

Usually you get a smaller engine but the car itself weighs so little that the car is capable of insanely quick accelerations.  And even more so, insanely good handling.

As for the Lotus Evora 400, you get the same structure.

Good old hydraulic steering is standard in the Evora 400 and you get AP Racing brakes to tie it all together.

With 302 pound feet of torque, the Evora 400 will do a zero to sixty sprint in 4.1 seconds and achieve a top speed of 174 to 186 miles per hour depending on what transmission the car has.

Performance as with most of the Lotus line up is very impressive.  For the United States, you get Toyota created engines which means they are incredibly reliable, but with the massive forced induction Lotus likes to use.

Lotus makes some very special and impressive machines.  They have been doing this sort of thing for years and the Evora 400 is a strong case for that.

The Evora 400 can most certainly keep up with most 911’s, but not all.  The 911 is such a special car that the Evora just isn’t better.  Just like the M3 and ATS-V battle, the M3 just gets an edge that numbers can’t explain.

I am happy to see Lotus creating new models that seriously compete with the giants.  They have had an interesting history with bankruptcy scares and financial woes, but I wish them a long and prosperous life.